Momentum is building among lawmakers to tighten up New York’s controversial bail laws after a series of high-profile cases where people are released into the streets without bail only to break the law again.

State Assemblywoman Inez Dickens said she recently spoke to Lt. Gov. Brian Benjamin about Frank Abrokwa, the Bronx poop attacker with a lengthy rap sheet that included 22 prior arrests and dozens of other sealed arrests since 1999.

Abrokwa was arrested after he allegedly smeared his feces in the face of a woman at a Bronx subway station on Feb. 21 only to be freed without bail.

“I talked to Lt. Gov. Benjamin about the case and said that something had to be done. He agreed. He said, `something’s got to be done about it,’” the Harlem Democrat told The Post on Thursday.

Gov. Kathy Hochul said in January that she rejected renewed calls to give judges powers to keep dangerous pre-trial suspects behind bars — something sought by Mayor Eric Adams. She said she wouldn’t “cave to pressure.”

Harlem Assemblywoman Inez Dickens said she recently spoke to Lt. Governor Brian Benjamin, who agreed that something needs to be done about repeat offenders. Twitter / @ericadamsfornyc

But a source told The Post that Hochul is now eager to address the no-cash bail law as part of the state budget. Hochul is the heavy favorite in a Democratic primary this year but is expected to face attacks of being soft on crime by Republicans in the general election.

A spokesperson for Hochul issued a brief response to questions from The Post about if reforms would be included in the state spending plan.

“Governor Hochul is committed to improving safety in communities across New York, is taking strong actions to combat gun violence and prevent crime, and is working with the legislature to strengthen public safety.” Hazel Crampton-Hays said in an email.

Dickens proposed legislation that would make throwing or smearing a victim with feces or other bodily fluids a felony crime — but she said outrage over the case has more lawmakers talking about revisiting the no-cash bail law and giving judges the discretion to order bail for repeat offenders.

“My bill is giving everyone an opportunity to think about bail reform. This is something we need to look at,” Dickens said.

She recalled backing the no-cash bail law in 2019 so mostly black and Hispanic defendants accused of minor crimes weren’t detained just because they were poor and couldn’t post bail pending trial. But she said she had “what ifs” concerns at the time.

“Well, the what ifs are happening now. We have to protect all the people,” Dickens said. 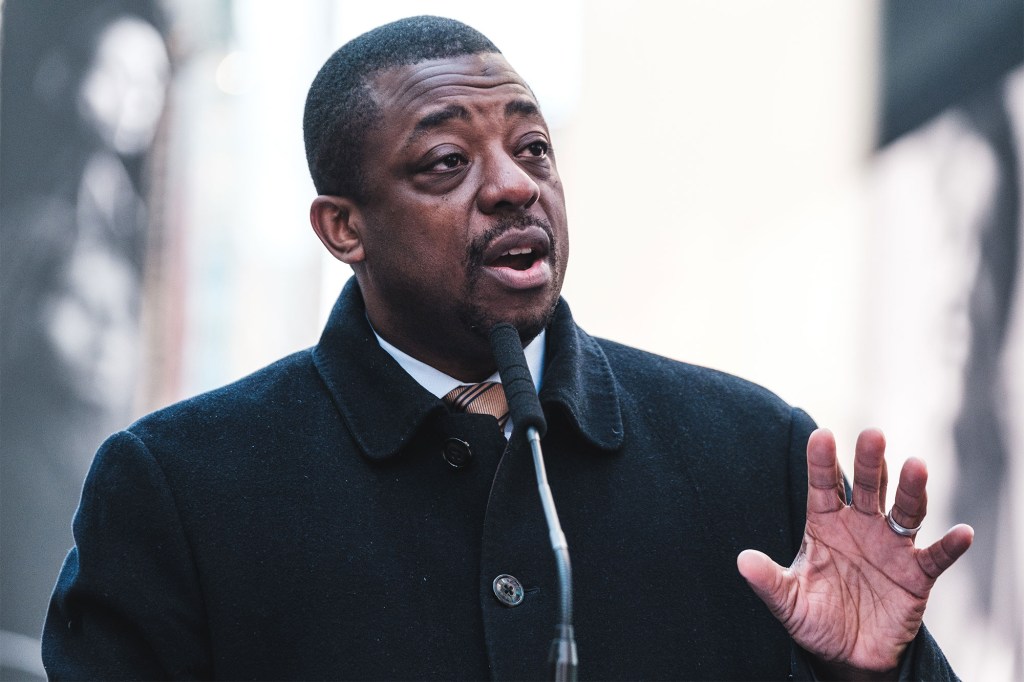 NY Lt. Governor Brian Benjamin agreed with Dickens, saying that something should be done about the controversial bail law. Stephen Yang

Sen. James Skoufis, a Rockland County Democrat, said in his eyes the state budget must include amending the bail law to give judges the authority to order bail for defendants with lengthy rap sheets. The budget is expected to be approved by April

“You can’t be shoplifting on Monday, get a ticket and shoplift the same store on Tuesday,” said Skoufis, chairman of the Senate Investigations Committee.

He also said certain gun possession crimes that are not bailable offenses should become eligible for bail. 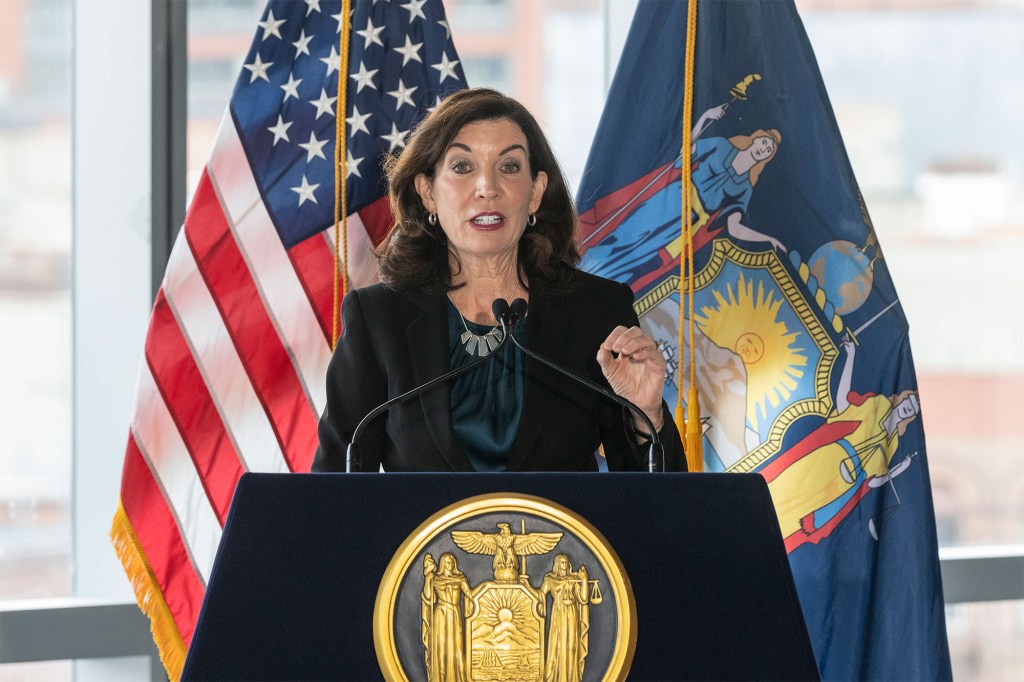 Hochul has been quiet about bail reform in recent weeks, but that may change as elections ramp up.Lev Radin/ZUMA

Stewart-Cousins has said the bail law has been unfairly and incorrectly scapegoated for a rise in crime and is part of a coordinated campaign by the Republican Party to take down Democrats.

But this senator, too, said the feces-smearing attack has struck a nerve among lawmakers as well as outraged citizens.

Another Assembly Democrat said there’s been private discussions among legislators about fixing the bail law, even though Assembly Speaker Carl Heastie, a Bronx Democrat, is a staunch defender.

“It’s not a permanent solution but we need to stop the bleeding,” said the lawmaker, who requested anonymity. “Are we just going to wait around?” 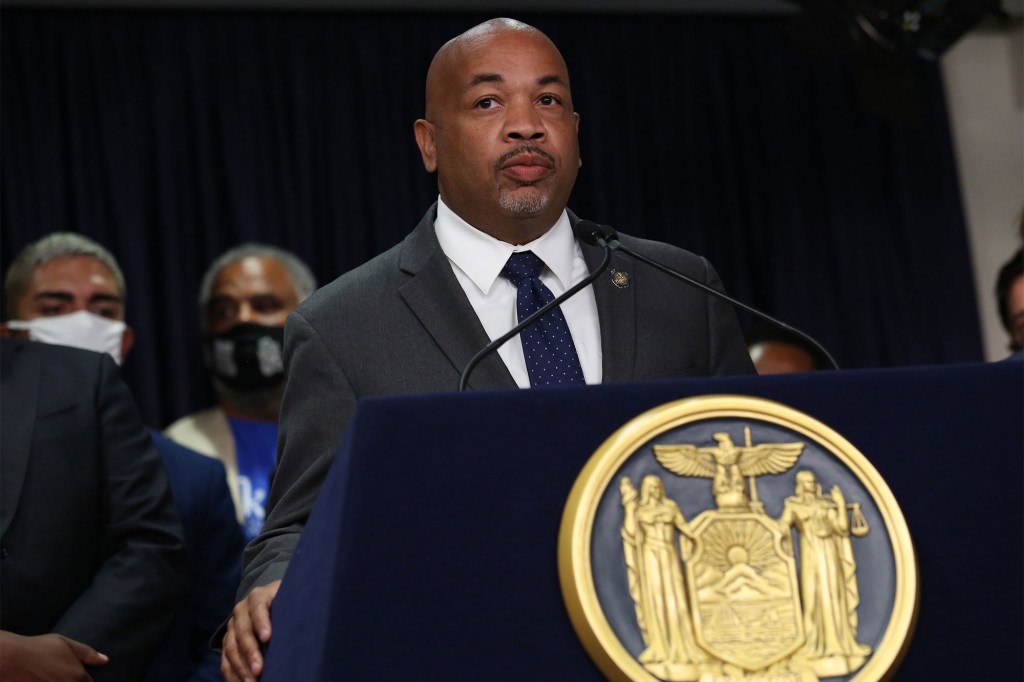 Assembly Speaker Carl Heastie has reportedly been a supporter of the current bail law. James Messerschmidt

The source said the spike in crime has rattled “even progressives” who are staunch backers of the no-cash bail law.

Sources also pointed to an op-ed by former Brooklyn Assemblywoman Joe Lentol posted in the Albany Times Union on Wednesday. Lentol, who had a big hand in drafting the original no-cash bail law in 2019, wrote, “lawmakers can consider creating a ‘recalcitrant misdemeanor’ category, setting bail when individuals have multiple open misdemeanor cases.

“This approach will help stop the arrest-to-release merry-go-round that gives the perception of a breakdown in public safety,” Lentol said.